MEDIA AND HEALTH: A DOUBLE-EDGED SWORD

Riding northbound from Fremont to Downtown Berkeley on Bart, I must have passed at least a dozen billboards advertising everything from lottery tickets to the latest smartphones. However, one sign in particular stood out to me. The front end of the billboard displayed an ad for CalFresh — a federal nutrition program that provides food assistance to families in need. The other end promoted a new deal for burgers at a popular fast food chain. To me, these signs gave a vivid, almost poetic representation of the dual nature of advertising and the inevitable link between health and media. While on one side we have the often criticized advertising of unhealthy fast food, on the other we have a pro-public health institution. Hundreds of Bart passengers, much like myself, see and are influenced by such advertising on a daily basis. In today’s fast-paced world there’s no question that media – whether it is in print on the giant billboard along the Bart tracks or a tiny link on the side of your Facebook newsfeed – is incredibly pervasive in our modern lives. Ads reflect and help morph social attitudes in all areas of modern life including health and wellness. The question posed time and time again, however, is whether this exposure is truly helping or hurting society.

In recent years, media marketing has come under much scrutiny for promoting unhealthy and unsafe behaviors. Alcohol advertising, for example, has been largely accused of relaying sexist messages in order to sell their products. These advertisements often portray women in an explicitly sexualized manner that is dehumanizing and degrading. Furthermore, the ads are mostly targeted towards men, and often imply the idea that drinking XYZ brand alcohol will not only help the ‘average Joe’ have a great time, but also attract hyper sexualized women. Though these ads do not explicitly tell people how to behave, they do mold people’s view on what the accepted norms are in a society. These ads can essentially be seen as social cues that influence and shape how a society thinks.

In stark contrast, much of the buzz in the realm of social media has been lauded as helping motivate social change and raise awareness about health issues. With their unique propensity for sharing different forms of media, such as Twitter, Reddit, Facebook and Tumblr, they have been credited with a number of successful social awareness campaigns. In these spaces, the power to speak and be heard belongs to the masses. Any soundbite, video clip, picture or tweet can go viral, including those that are promoting public health. A prime example of this phenomenon is the recent rape/sexual assault prevention campaign with the slogan, “The only way to stop rape, is to not rape”. This campaign attempts to shift away from the common societal view of rape as a failure or lapse in self-defense by the victim and focus instead on accountability of the wrong-doer. Often, spurs in campaigns connect to current events relayed in the news media – in this case, events such as the Steubenville trial or the violent rape of young women in India spurred many people to action. In this way, the rapid speed at which campaigns are able to go viral matches the pace of world events.

Ultimately, though media marketing of unhealthy products or behavior, media can also be a powerful tool to encourage healthy behavior and motivate social change. More frequently we see the trend of public health organizations utilizing the power of not only conventional media outlets to promote healthy habits, but also that of social media to drive positive social change. 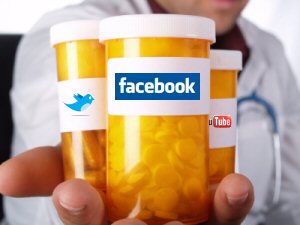