Put Down Your Plastic Water Bottle

The Dangers of BPA

Smoking causes lung cancer. Sleep and exercise are important for your health. Loud music can damage your eardrums. Plastic water bottles are not good for you. What is one similarity between all of these statements? They are all facts with supporting evidence. However unlike the first few statements, society is not doing much to fight the ingestion of dangerous chemicals from plastic in daily use, notwithstanding the major negative health implications resulting from the toxic chemical Bisphenol A (BPA).

Many consumer goods in today’s society are composed of plastic containing a mixture of chemicals, including the toxic chemical Bisphenol A (BPA). Some of these products include plastic water bottles, sports equipment, cosmetics, medical equipment, eyeglass lenses, CDs, DVDs and even coatings of food and drink cans. Since BPA is a chemical class of compounds known as endocrine disruptors, it interferes with the production, secretion, and function of our bodies’ natural hormones. By deregulating the body’s natural hormonal balance, BPA then triggers unprecedented hormonal changes in the body, including thyroid, estrogen and prostate changes. The disturbances present serious health implications. 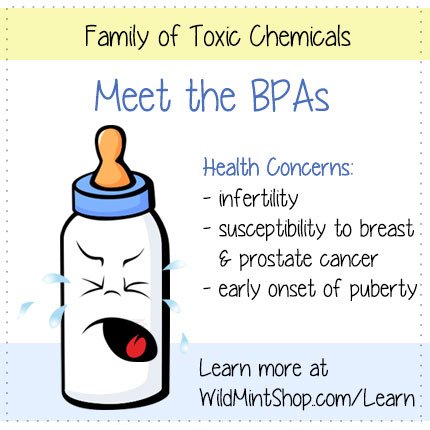 Researchers have found that BPA increases the risk for a myriad of health problems. The American Heart Association conducted a study demonstrating that BPA consumption was linked to a quick rise in blood pressure. Two hours after drinking from a plastic water bottle, participants’ BPA levels were 16 times higher than before. As this chemical is an estrogen-mimicking hormone, studies conducted at Harvard Medical School in particular have suggested that it is a threat to women, linked to infertility and emotional problems. Additionally, BPA particles have been labelled as obesogens, which are hormone-mimicking pollutants that turn precursor cells into fat cells in the fetus. In other words, a mother’s exposure to this chemical while pregnant may carry potential health problems to the fetus. There are various other health consequences associated with BPA, which are shown in Figure 1. Many of the major public health problems facing society today and in the future, including obesity, infertility, and premature puberty, are directly influenced by BPA.

According to the Harvard School of Public Health, BPA represents one of the highest volumes of chemicals produced worldwide. In 2011, it was estimated that around 10 billion pounds were produced during the manufacturing of plastic. As a result, the overwhelming consequence of airborne BPA is that 95% of adults and 93% of children have BPA circulating in their blood (Centers for Disease Control and Prevention).
Clearly this issue does not have a simple solution. In order to eliminate BPA from our society, more people need to be educated on its negative effects on our health for current and future generations. But fortunately, there are simple steps that you as a student can take to safeguard your own health. Next time you go to buy a water bottle at GBC, or are tempted to purchase the supermarket’s cheap bulk pack of water bottles, use a reusable BPA-free water bottle instead.