January 2016 marked the kick-off of the Sustainable Development Goals (SDGs). The SDGs are a universally agreed upon set of 17 goals that intend to improve living standards for everyone in a sustainable manner. Included in this set of targets are objectives like ending hunger, reducing our ecological footprint, and promoting peace and justice. Approved by the United Nations in September 2015, these goals built off the previous global objectives and will require intense collective action until 2030.

A call for global action, the SDGs require each individual to factor in a sustainable mindset in order to preserve the livelihood of our world. While sometimes these challenges the SDGs are confronting can feel like external or irrelevant issues for some, it is essential to translate and impose these goals in all communities. Some of the SDGs that the Berkeley community is actively involved in include the implementation of sustainable cities, responsible consumption and production, and taking action against climate change.

Half the world already lives in urban areas – by 2050, it is estimated that approximately 2/3 of humanity will live in cities. This rapid movement to cities coupled with a rapidly rising global population demands that we begin “transforming the way we build and manage our urban spaces” in order to achieve sustainable development. Here at UC Berkeley, there are several steps being taken to address this very issue. The College of Environmental Design, for example, “address[es] the world’s most pressing urban challenges” by offering majors such as sustainable environmental design and landscape architecture. Understanding the gravity of this problem is the first step to solving it; Berkeley combats this issue by offering a full curriculum related to urban development.

The way in which we create waste “can help with food security, and shift us towards a more resource efficient economy.” However, it can also be a destructive feature regarding the future of the planet. One of the most sustainability-oriented features of the Berkeley campus is the great collection of recycling and compost bins around campus. Spread throughout campus and the comm 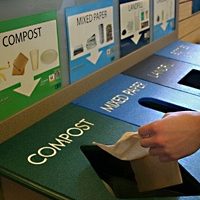 unity as a whole, Berkeley combats wasteful consumption through the implementation of the city-wide Zero Waste Goal and the Waste Campus Initiative. Holding a transgenerational ideal of eliminating waste, the city adopted the Zero Waste Goal, aiming to “ultimately eliminat[e]/diver[t] the waste that goes to landfills.” The campus succeeded in increasing the diversion rate, or the rate of waste diverted from the landfill to recycling, to 75 percent. Although a highly populated city, Berkeley has expertly found a way to mitigate waste creation and continues to reduce the city’s impact on the environment.

Another one of the SDGs relevant to the Berkeley community is promoting action against climate change. In the 2016 election, the candidates discussed very little about the threat it causes. But while addressing college students in Iowa, Vice President Joe Biden said “Global warming is the greatest threat to your generation of anything at all, across the board.” Thankfully, the Berkeley community is one of the most progressive cities on Earth regarding taking action on climate change. The Berkeley Energy and Climate Institute is one of the most forthright groups at Berkeley focused on funding research, creating jobs, and promoting sustainability. Additionally, Berkeley offers students the ability to get hands on experience with sustainable development through the Cal Energy Corps- an undergraduate internship opportunity to train and inspire students in the processes of creating clean energy sources.

The Sustainable Development Goals demands participation from everyone in the world. In order to promote a more equitable, fair world and protect the planet from the perilous dangers of irresponsible action, we must maintain our focus on these goals because, as Secretary-General Ban-Ki Moon said “There is no ‘Plan B’ because we do not have a ‘Planet B.’”