Administrative Regulations and the Future of Reproductive Health in America

Since 1990, reproductive health in America has become safer, more efficient, and less costly. Teen pregnancies have decreased substantially, new technology has made abortions safer, and access to contraception has slowed the spread of sexually transmitted diseases around the world.

However, under the new administration, there have been actions already taken that have the potential to demonstrably change the progress that has been made on these issues. Notably, the reinstatement of the Mexico City Policy, more commonly known as the “global gag rule,” places a stranglehold on U.S. federal funding of any organization that provides “abortion counselling or referrals [and advocates] to decriminalise abortion or expand abortion services.”

The reestablishment of this policy creates new worries and questions for people in America and around the world. Lack of access to contraception and knowledge about reproductive health has deadly consequences for everyone. This policy has, in the past, led to an increase in unintended pregnancies and rising abortion rates. Because people suffer from lack of knowledge with regards to these medical procedures, the subsequent abortions become less safe and often deadly. 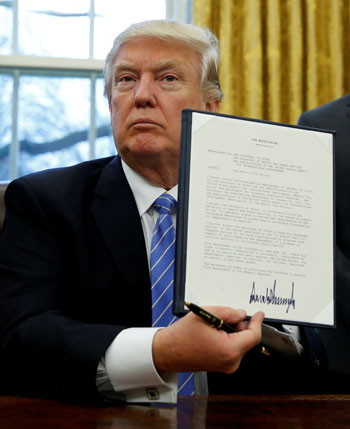 New administrative efforts have not only reinvigorated the “global gag rule” but have expanded its domain. The impact of the broadening of this policy will have detrimental effects on maternal health care, HIV/AIDS testing, and access to birth control. The expansion of the Mexico City policy means that this rule applies not only to family planning clinics, but to all international health institutions that receive U.S. funding. According to The Guardian, in places where local partners are the only health care providers in secluded areas, these organizations “will not be able to provide HIV prevention, care and treatment services; integrated maternal health care; and contraceptive services among others if they intend to receive US government funds.” Additionally, this means that agencies involved in combating Zika could lose funding if they even mention abortion as an option to women in afflicted countries.

Signed into effect only a month ago, there has been substantial blowback on this policy. Bill and Melinda Gates published a letter warning of the danger that this policy places on millions of women and children. The Australian government has promised nearly $10 million in funding over the next three years for the Sexual and Reproductive Health Program in Crisis and Post Crisis Settings. There is already bipartisan support for a repeal of the global gag rule, endorsed by over 30 Democratic, Republican, and independent senators.

With the growing disapproval of this policy, the likelihood of legislative removal of the “global gag rule” is on the rise. The impact of this policy has been seen before; women are not less likely to have abortions when this rule is implemented, it only makes the abortions less safe. Dr. Mengistu Asnake, a representative from a global family planning group based in Ethiopia, accurately sums up the potential danger of this policy: it will not only impact the one sphere of public health it was intended to impact, but it  “will [also] create a chilling effect on every health program.”