As college students, we often hear of the large amounts of time we spend on social media; according to a recent article by The Washington Post, results from a poll conducted by Common Sense Media showed teens are now spending an average of nine hours a day using social sites. For some Hurricane Harvey victims, however, the widespread usage of social media had its benefits. When the owner of a nursing home in Houston feared a group of elders would drown due to the rising water levels, she took a picture of the situation. Only after her son-in-law posted the picture on Twitter did it go viral. At first, many people thought it was fake due to the extremity of the situation, but the picture spread quickly on Twitter and the group was saved that very day. 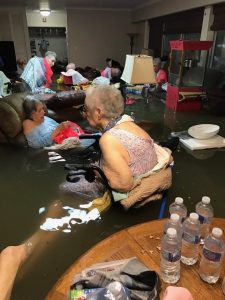 The past few weeks have been filled with natural and tragic turmoil. Hurricanes and earthquakes have been shaking the already unsteady climate of the world. Hurricanes Harvey, Irma, and Maria, as well as the earthquake in Mexico, have been causing havoc all throughout parts of southern and eastern United States, Central America, and South America. In the recent terror attack in Las Vegas, more than 50 people were killed and more than 500 were injured. These tragedies have caused hundreds of people to experience severe losses of family members and their homes. As humans who care about the well-being of others, one way many of us have been helping is through social media. Like the elderly in the nursing home, many families have been saved through quick posts for help that go viral on Twitter and Facebook. Our exposure to social media creates this responsibility for us, which isn’t to be taken lightly.

Like those in the nursing home, there are many examples of other individuals who were rescued by first responders due to their social media posts. Peter Holley, from The Washington Post, reported about one woman in Houston who was saved in a small amount of time thanks to her social media posts.

By 12:41 a.m., she had tweeted her gratitude and assured her followers and friends that she was safe:

Got picked up bty the fire rescue . Thank You . One of you had connections and all I can say is I'll be eternally grateful!!!

The children and I are safe. Thank you everyone and thank you Facebook!!!!!! The miracles of social media. Forever grateful!!!

These viral posts exemplify how social media might be changing the world for the better. However, with change comes consequences. There are negative impacts of viral social media outreach that can sometimes harm individuals, and as avid users we should be careful about the validity of each claim we see online. iStrategy Labs has studied the positive and negative impact of social media use during natural disasters and terror attacks. In a 2014 article, Lauren Zoltick provides examples of different situations and the takeaway from social media impact. During the Boston Marathon Bombing, for example, many social media users decided to conduct investigations of their own and inaccurately accused innocent people as being the suspected bomber. The news wasn’t confirmed by officials, and the family of the innocent suspect had already begun to receive threats. The Las Vegas shooting, which is currently the deadliest shooting in modern U.S. history, has also caused many fake posts to go viral on the internet. The fake claims online portray how people take advantage of naïve social media users and can cause unnecessary panic and fear. Some go so far as to create fundraisers for supposed victims but actually pilfer the funds for their own personal use.

Rich Jaroslovsky, Professor of Media Studies at UC Berkeley explains, “The platforms themselves have an inescapable responsibility to work with authorities during natural disasters and make every effort to verify the information they are disseminating on their platforms.” Although the various platforms should be held accountable, that appears to be an almost impossible feat, which leaves the responsibility on us as a society. We should be aware about the credibility of all social media postings and use social media sensibly. NPR published an article written by Wynne Davis, in which a list of tips are included for fact checking online posts. These strategies include paying attention to the credibility of the domain or individual, checking if the quotes are from reliable sources, and reverse image searching any pictures included in the posts. Being aware is crucial because there are many big, brandished organizations that reel in donations only to spend frugally on a legitimate relief effort and instead use the funds for their own benefit. For this reason, donating can be a little tricky. A website called “The Charity Navigator” helps check the credibility of organizations and can be helpful to check while deciding where to contribute.

Social media is tied to our public health because it can serve as a tool for the community to help others in need. It is our responsibility to care about current issues because it is our communities and loved ones dealing with the consequences. It can be useful for victims of varying natural disasters by giving tips and information about how to stay safe. It can also be utilized by family members to get updates about victims involved in terror attacks. As college students who remain aware and up to date on current news around the world, we should learn more about contributing to relief efforts and staying socially conscious. Whether we provide monetary support or make posts about shelters or safe spaces for victims, social media is a definitive contributing factor to the aid effort, although it should be used wisely. If you do want to help and contribute to the ongoing relief effort, remember to be mindful and do your own research before donating.