From November 2016 to October 2017, California’s hepatitis A outbreak, which originated in San Diego, killed 19 and infected over 500 people. Hepatitis A can be a fatal disease, and this is not the first time San Diego has seen a sudden rise in hepatitis A cases. In 1996, the number of confirmed cases peaked at 645. The cause of this outbreak  has not yet been found; San Diego County’s occupational health program, WorkPartners OHS, has stated that “no common source of food, beverage, or other cause has been identified.”

To first understand this crisis, understanding how hepatitis A is caused, transmitted, and prevented is essential. “Hepatitis” simply means an inflammation of the liver; the common types — A, B, and C — are differentiated by the virus that causes this inflammation. Hepatitis A is, according to the Centers for Disease Control, a “contagious liver disease” that is generally communicated “when a person ingests the virus from contact with objects, food, or drinks contaminated by feces or stool from an infected person.” This virus is highly contagious and has also been spreading to neighboring counties around San Diego County. The Los Angeles Times reports “there have been 70 cases in Santa Cruz County, 12 cases in Los Angeles County, and five cases elsewhere in the state.”

However, there are many ways to prevent this infection. A vaccine for hepatitis A exists, but consistent “handwashing with soap and warm water after using the bathroom, changing a diaper, or before preparing food” are effective ways that can prevent the spread of hepatitis A.

Approximately two-thirds of the victims of this current outbreak are part of San Diego’s homeless community. The other third who have been infected are individuals who “[associate] with the homeless population, such as friends,” or people “who [lack] records and are most likely homeless.” This outbreak is disproportionately affecting the homeless population in San Diego, but why? The answer to this has much to do with the reality of being a homeless individual in an urban area. In San Diego, the homeless population numbers to nearly 9,000 and is “now the fourth largest in the country.” This group lacks access to many basic sanitation needs, has a high proportion of illicit drug use, and “often have underlying liver damage due to alcoholic cirrhosis or hepatitis B or C infection.” The synthesis of all these risk factors elicits a high susceptibility to hepatitis A infections. 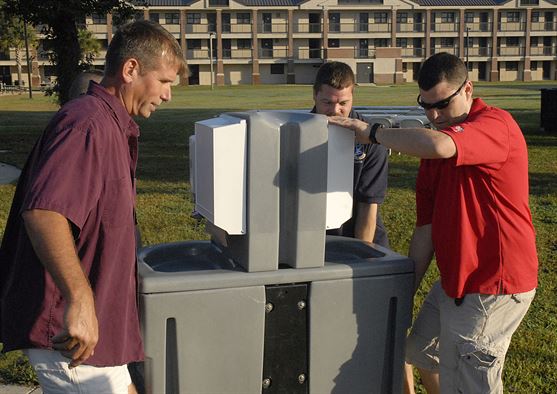 Handwashing stations made available to the homeless community can be effective in preventing hepatitis A infections.

In response to this outbreak, Governor Jerry Brown has declared a state of emergency that “allows the state to increase its supply of hepatitis A vaccines in order to control the current outbreak.” This response comes after many critics challenged the county’s initial response, when even “seemingly small actions required several weeks, or months, of exchanges before anything got done.” Some of the intervention tactics have involved informative poster distribution, spraying down streets with bleach, and an expanded immunization campaign.

Looking to the future of this outbreak, many public health officials hold bleak outlooks. Dr. Monique Foster, an epidemiologist for the CDC, explained, “It’s not unusual for outbreaks to last more than a year.” The effects of this crisis could be felt for years to come, and Santa Cruz’s public health manager, Jessica Randolph, fears, “I don’t think the worst is over.”

However, there are steps that can be taken individually that will help contain this outbreak. Health officials advise that vaccinating at-risk populations is the most efficient and reliable way to control an infectious disease, and the hepatitis A vaccine is given in a series of two injections separated by six months. If you feel that you have hepatitis A, you should contact the state health department or a health professional. Symptoms of hepatitis A include, but are not limited to, fevers, dark urine, nausea, joint pain, and jaundice.