Islamophobia as a Public Health Issue

“An intense fear or hatred of, or prejudice against, the Islamic religion or Muslims, especially when seen as a geopolitical force or the source of terrorism.”

Many argue that the 9/11 New York City terrorist attack led to the birth of Islamophobia in the U.S., marked by the rise in anti-Muslim hate crimes, attacks on mosques, and various assaults on visibly Muslim individuals within the recent years. However, a connection that mainstream media fails to acknowledge is Islamophobia’s effect on Muslim American access to equitable health care. Islamophobia is in and of itself a public health issue.

The impacts racism, discrimination, prejudice, and bullying can have on mental health are largely understood and accepted by the scientific community. Today, public health advocates are pushing for greater recognition of Islamophobia’s deep-rooted connections to serious mental health issues. Some Muslims experience a unique internalized paranoia stemming from worries that they are feared — that the public associates them with ISIS and other terrorist organizations.

As Dr. David Schmid highlights in his book Violence in American Popular Culture, “the words ‘Allahu Akbar,’ God is great, … become a common device used by movie or television show producers to signal fundamentalism and danger.” This misrepresentation causes Muslim Americans to feel the need to filter and suppress their most common messages of prayer in public. As a result of this internalized paranoia, many Muslims feel pressured to defend their identities and separate themselves from mainstream images of violent radical Islam.

Another peculiar component of Islamophobia as a mental health issue is its tendency to affect non-Muslims as well. An article titled “Young non-Muslims face Islamophobia too” published by The Conversation writes that “nearly all of the 33 young Sikhs who participated in [a] study recalled being recognized as Muslim. This was the same for young Hindus and other South Asian young people, as well as black African and Caribbean youths.”

This misrecognition of Sikhs for being Muslim has made them vulnerable to incredibly violent attacks, such as the 2013 assault on a New York resident and physician, Dr. Prabhjot Singh, who had his jaw broken by a group of individuals yelling, “Terrorist, Osama, get him.” The ongoing ignorance and confusion clouding the Muslim identity serves as evidence of the public’s misunderstanding and misidentification of the Muslim population.

All too often, Muslims are projected in media synonymously with Arabs. Although there is a significant Arab Muslim population, 62% of the world’s Muslims are not present in the Middle East. In reality, most Muslims reside in the Asia Pacific region, including countries like Indonesia, Malaysia, India, and Pakistan. And even when efforts are focused on Arab Muslims, data still remains largely absent due to the U.S. Census’s categorization of Middle Easterners as white, granting Arab Americans their title as a “silent minority.”

So how does this homogenizing of the Muslim identity affect access to equitable health?

Aside from the previously described mental health effects and the direct hate crimes that result from homogenizing Muslims, efforts to actively reduce health inequities for Muslim Americans are also hindered. In order to be deemed credible and necessary, any major health policy or reform proposal must be supported by published data and research. However, it is the lack of available research regarding the complexity and diversity of the Muslim identity which limits efforts to address Muslims’ need for culturally competent health care. Failing to acknowledge Arabs and Muslims for their diverse and complex cultural traits in research ultimately interferes with and obstructs efforts to provide them with culturally competent care.

So what exactly are these shortcomings, or deficits, in providing equitable care to Muslim Americans?

Islamophobia in the Clinical Environment

A 2012 study conducted by the Program of Religion and Medicine at the University of Chicago found “gender-concordant care as the most common requested health care accommodation by Muslim Americans,” followed by “‘Halal’ food and neutral space for prayer.”

Although Muslim individuals may have varying levels of comfort when interacting with the opposite gender, it is important for clinicians and health providers to at least understand Islamic practices in order to be sensitive to how certain beliefs may conflict with traditional U.S. medical practice.

One example of a Muslim woman who received surgery at a U.S. hospital serves as a clear example of conflict that can occur when failing to understand and comply with Islamically competent care. Prior to beginning her procedure, the woman informed her surgeon, “I need to at least have my head covering on when I leave the operating room”; however, when she woke from her operation, she found that her head covering, or hijab, was completely removed and her legs were publicly showing through her non-modest hospital gown. A basic understanding of Islamic practice is enough to comprehend how uncomfortable and horrifying of an experience this could be for many Muslim women — an experience which could potentially lead to an extreme fear and distrust of hospital and health care services.

Although halal food and daily prayer are common practices among Muslims, even clinicians may be unaware of or fail to have a solid understanding of these practices. This places an additional burden and stress on patients, leading them to feel as though they need to explain their identities and beliefs just to receive basic accommodations. By creating prayer spaces and incorporating basic Islamic beliefs into clinician cultural competency trainings, Muslim patients will experience a much greater sense of belonging in the healthcare system. They will also be more equipped to attend to their personal spiritual needs — a crucial fact, as people tend to find comfort in religion and faith during times of ill health and hardships brought on by health complications. This increased trust and comfort in the healthcare setting will ultimately help to remove barriers preventing Muslim patients from accessing or seeking out medical care, improving overall community health and reducing inequality in the system.

How Does This Affect Berkeley Students? 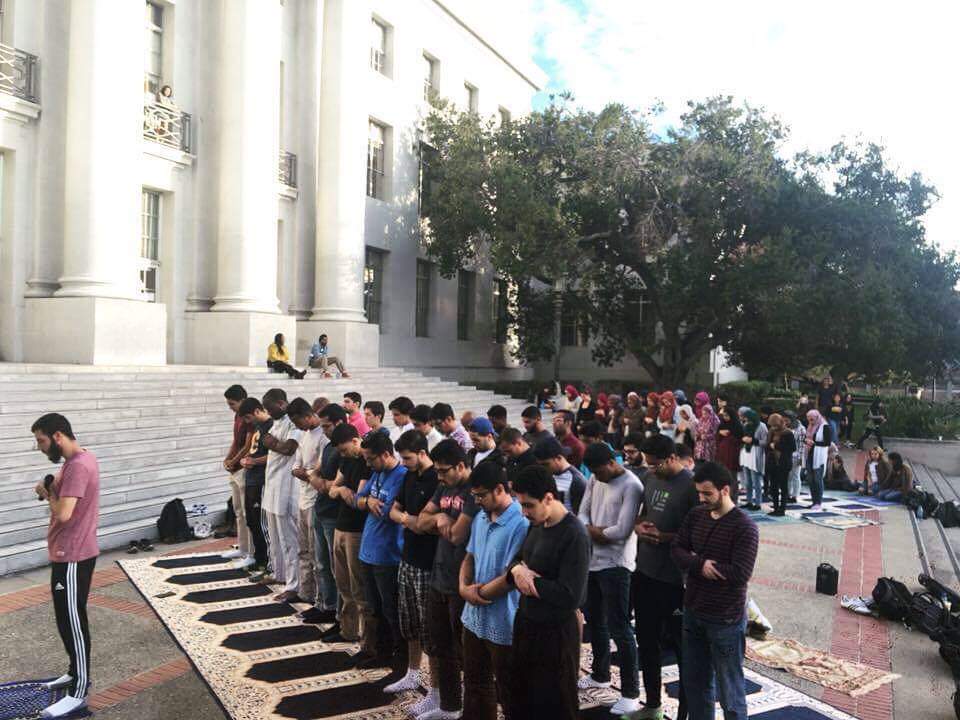 ASUC Senator and junior Public Health major Nuha Khalfay explains that, as a Muslim, she has experienced certain “microaggressions,” which although aren’t explicitly Islamophobic can still affect how she accesses care and whether she is receiving quality care. Khalfay provides examples of such microaggressions, such as her physicians’ expectations that she take her medication three times per day despite her need to fast during Ramadan — a holy month in which Muslims commemorate the first revelation of the Qur’an by fasting from dawn to dusk.

Khalfay explains that she has even experienced Islamophobia’s effect on health care while seeing her physical therapist at UC Berkeley’s Tang Center. “They asked me to bring shorts, but I don’t show my legs in front of men so I just requested a female physician,” said Khalfay. “During the appointment she asked me to step outside and when I suggested to put [longer] pants on, she insisted that we just stay inside. … She’s really nice but she just didn’t get it. … I don’t know if I got the full impact that I could’ve gotten out of that session.”

Discussions about incorporating cultural competency into healthcare often, whether intentionally or not, leave out Muslims as a marginalized group who deserves specialized care. It is important to acknowledge the direct impacts of Islamophobia, in the form of hate crimes, school bullying, and physical assaults. However, with the recent Muslim ban proposal, Muslims justifiably do not feel welcomed in this country, let alone in our hospitals and clinics.

There is a great need for research acknowledging the Muslim identity for its complexity, as opposed to producing additional studies where Arabs are categorized as white or South Asians are grouped with Asians. Islamophobic-free medical practices include clearly labeled pork-containing medications and foods and nurses who are able to guide patients through the wudu, or ablution practice, before prayer.

As with all public health crises, Islamophobia is multi-layered and will not be solved overnight. There is still, however, hope for progressive efforts to raise awareness and improve clinical accommodations so Muslim patients do not end up spending 15 minutes of their 20-minute window explaining to their physician what it means to be a Muslim.