Modern medicine has mitigated the suffering caused by so many diseases from humankind, yet only one has ever been eradicated. Are we close to eradicating another? The short answer is yes, but the long answer is more complicated.

Smallpox was successfully eradicated in 1978, and the next disease on track for eradication is poliomyelitis, or polio. One can draw many similarities between the two: both are viruses that have terrible pathologies, but both are preventable by vaccines that confer immunity to the vaccinated.

The reasons for choosing polio as the next target for eradication are various. Take measles, example. Measles is one of the most highly infectious diseases known to man, and it, too, has an effective vaccine. And, unlike polio, measles has no known non-human reservoir, meaning measles can’t circulate in non-living media or in non-human animals.

But, measles complications happen at far lower rates than polio complications, and fear is a powerful driving force. The regular outbreaks and consequent paralysis of thousands of children in the 1950s, together with the dramatic initial success of the oral polio vaccine, convinced the world to set its sights on polio.

Dr. Arthur Reingold, the associate dean for research at the UC Berkeley School of Public Health who has worked on several vaccine-preventable disease panels worldwide — including those under the Centers for Disease Control and Prevention and the WHO — weighed in on the plateaued eradication efforts.

According to Reingold, funding for the WHO is limited overall. With only a few key donors, who are partners on the board of the Global Polio Eradication Initiative already, and several major obstacles preventing vaccination campaigns, polio elimination efforts are stagnating — it’s post-polio syndrome on the scale of countries and international non-governmental organizations.

Shortage of funds contributes to the issues facing vaccination rates. Typical vaccines use an inactivated form of the virus they immunize against; however, the oral polio vaccine (OPV) — the type historically used in most widespread vaccination programs — utilizes a live but weakened, or attenuated, form of the polio virus.

The benefit to using an attenuated virus is that it engages a stronger adaptive immune response, which helps long-term immune memory recognize poliovirus should it be encountered in the wild. Those vaccinated with the OPV also shed the live attenuated virus, spreading contact immunity to unvaccinated individuals via the same pathway that people would otherwise be infected, like drinking water in the absence of sanitation.

The disadvantage, says Reingold, is that children must be inoculated more than four times in order to establish immunity. Within those doses hides the small chance that the weakened virus reverts to a neurovirulent form and, once shed by a vaccinated person, infects an unvaccinated person with vaccine-derived poliovirus. 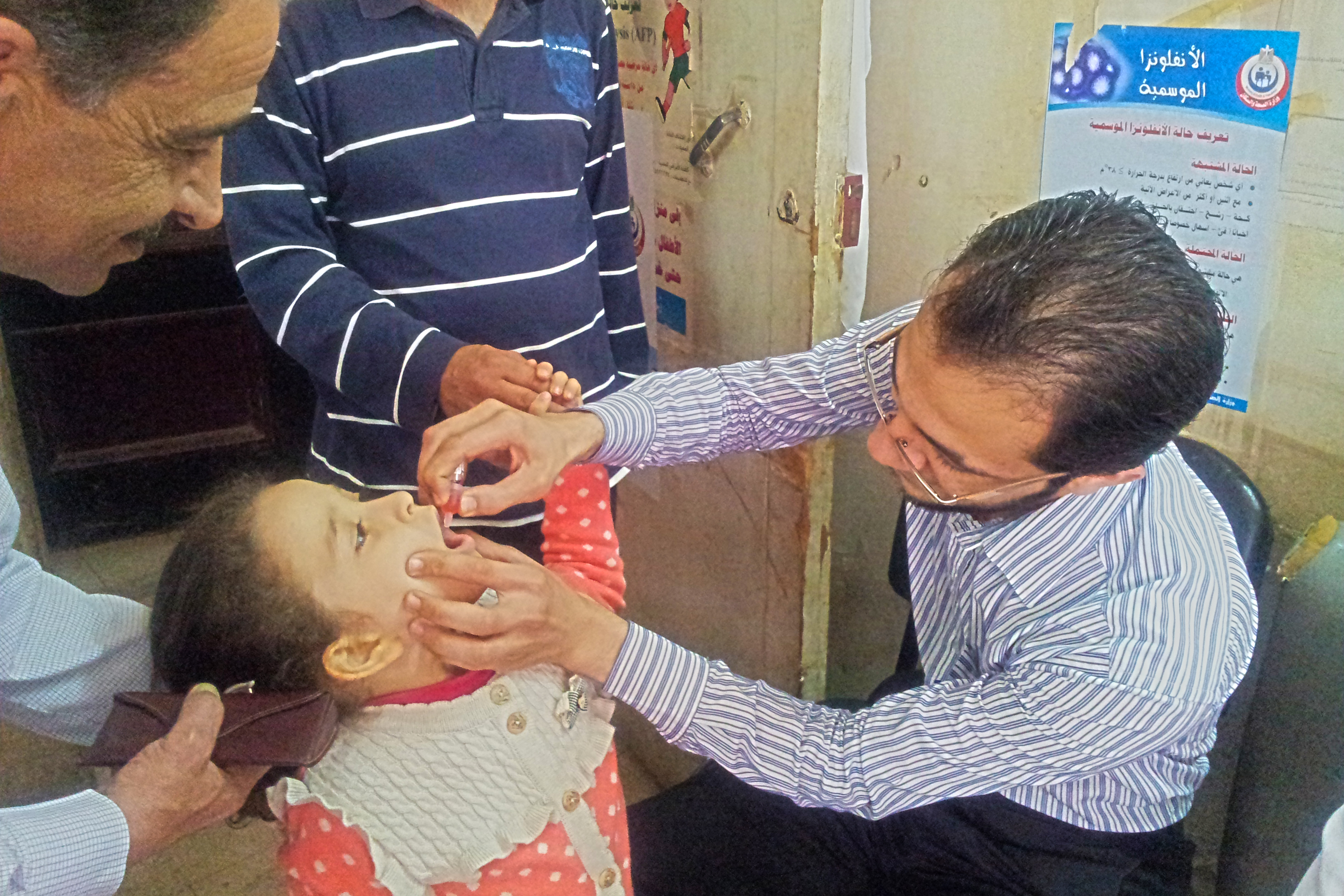 “Polio drops” ­­— oral polio vaccine — are given to a child during a vaccination campaign in Egypt.

Because of this threat, affluent countries have switched back to the inactivated poliovirus vaccine (IPV), which, according to Reingold, costs around 10 times as much as the oral polio vaccine; the IPV requires more highly-trained vaccinators to administer. IPV pre-dates the OPV and poses none of the risks for neurovirulence because it contains a “killed” poliovirus that is unable to replicate once in the body.

Yet the stability of the inactivated virus also has its drawbacks. Although the vaccine prevents paralysis in an infected person, it does not stop that person from transmitting wild poliovirus if they are an asymptomatic carrier. IPV is therefore unable to eradicate polio.

As of 2016, Pakistan and Afghanistan were the only two countries where wild poliovirus circulated endemically; for comparison, in 1988, these two countries only accounted for around 0.02% of the global polio burden. Permanent vaccination teams were established in Afghanistan in order to keep children up-to-date on vaccinations, wherever they were in the country.

In spite of such progress, notably an exhaustive effort to eliminate polio in India, some pockets of the world remain hostile. Conflict-torn areas in Pakistan are outright dangerous for vaccine workers to penetrate. Domestic vaccine workers who speak the language and are familiar with the customs have been killed by non-governmental militants, who espouse claims that the OPV is dangerous or that vaccination campaigns are part of a Western conspiracy to sterilize Muslims and prevent children from getting vaccinated. In Somalia, extremist rebels say the vaccine causes AIDS. Other times, it is simply “vaccination fatigue” by parents whose children have received more than 15 doses.

So, what can we do? Develop a skill set, says Reingold. Study public health, public policy, or economics, and strengthen political will to work through the problems financing or implementing such complex campaigns.

“There are some who say we shouldn’t have an undergraduate major in public health, that undergrads should study things like molecular biology and leave research and field experience to the graduate or medical students,” says Reingold. But at Berkeley, an interdisciplinary undergraduate education helps to develop public health interests in future doctors and policymakers alike. “‘How does this apply to the real world?’ is a question we ask ourselves a lot here in the School of Public Health.”

We are positioned in a place of great opportunity and vast intellectual resources to be solving the toughest global health challenges of humankind. More than 40 years ago, countries around the world came together to rid humanity of smallpox — a global campaign now considered one of humanity’s greatest achievements. With the eradication of polio so attainably close, it’s important, now more than ever, that we not be paralyzed into inaction. Let’s get moving.