The Crisis of Crisis Pregnancy Centers

Imagine you are a young woman who has just gotten pregnant and is considering an abortion. You are anxious and scared, but you become relieved when you see an ad for a health center that is offering free pregnancy counseling to help you explore your options. However, when you arrive at the health center, you are shamed, misinformed about the risks associated with abortion, and intimidated into continuing your pregnancy. This is a daily occurrence at pro-life pregnancy resource centers, often called “crisis pregnancy centers,” across the country.

A recent Supreme Court case has brought the issue of crisis pregnancy centers into the national spotlight. Crisis pregnancy centers are non-governmental organizations that provide counseling, prenatal care, and other services to pregnant women. These centers are typically religiously affiliated and are associated with national anti-abortion organizations. Crisis pregnancy centers aim to convince teenagers and young women with unplanned pregnancies to choose motherhood or adoption rather than receive an abortion. Though these efforts may seem well-intentioned, these centers often use deceptive advertising, provide inaccurate medical information, and disproportionately target women of minority and lower-income backgrounds.

In June 2018, the Supreme Court ruled that crisis pregnancy centers are not required to provide pregnant women with information about how to end their pregnancies. The case, National Institute of Family and Life Advocates v. Becerra, was concerned with a California law that requires crisis pregnancy centers to post notices informing low-income women that free or low-cost abortion, contraception, and prenatal care are available to them through public programs and to provide contact information for these resources. The centers argued that requiring these notices was essentially mandating that they promote the practice of abortion and was a violation of their right to free speech. However, those defending the law argued that the notices counteracted the often incomplete or misleading information provided to the women by the clinics themselves.

Although much of the debate surrounding the Supreme Court case has focused on how the court should analyze First Amendment challenges, the case has drawn attention to how crisis pregnancy centers pose a significant public health risk. These centers often advertise services, such as ultrasound and STD testing, in high school and college newspapers, on buses, and on billboards. A Google search using phrases such as “abortion services near me” often returns a list of results with crisis pregnancy centers featured prominently at the top of the list. For these reasons, many women will seek care and medical counseling at a crisis pregnancy center despite the fact that most centers do not have medically trained or licensed staff members. For example, according to a 2007 survey conducted by NARAL Pro-Choice Maryland, only 18% of Maryland crisis pregnancy centers employed trained medical staff.

Crisis pregnancy centers often disseminate misleading information about the potential risks associated with abortion. According to the Guttmacher Institute, some crisis pregnancy centers tell women that abortion increases their risk for breast cancer and of having a future ectopic pregnancy. Centers also made claims that it makes future conception difficult, causes severe scarring and damage to the uterus, and will negatively impact their mental health.

However, all of these claims are either misleading or downright false. Numerous studies conducted by the National Cancer Institute have concluded that there is no association between induced abortion and increased breast cancer risks. Additionally, while problems like uterine scarring, ectopic pregnancy, and infertility have been observed from second-trimester abortions, first-trimester abortions, which comprise 92% of all abortions performed in the United States, are not associated with any of those outcomes. 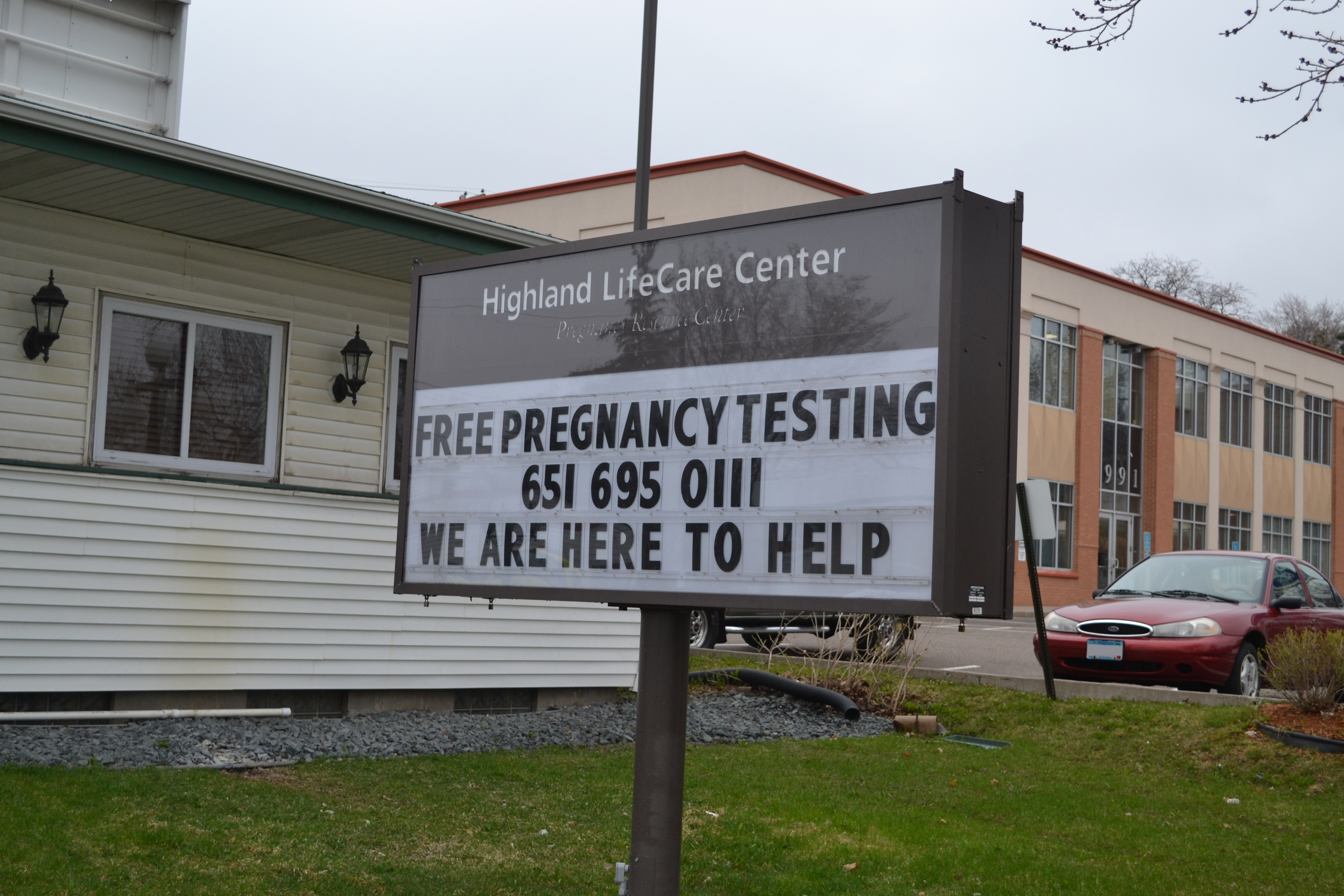 Crisis pregnancy centers, like the one pictured above, often advertise free services like testing and counseling. However, the information they provide can be misleading — or even false.
EDITED/ORIGINAL PHOTO BY BRIANNE BILYEU

Providing misinformation about the risks associated with abortion aligns with crisis pregnancy centers’ goals to discourage women with unplanned pregnancies from seeking abortions. Because these centers do not perform abortions, they are not bound to the legal, ethical, and medical standards of informed consent. Regardless, the misleading information they provide has influence over whether a pregnant woman chooses to terminate her pregnancy, and this is clearly too important a decision to make using incorrect information.

Ultimately, the misleading information provided by these centers poses a significant public health risk because it may pressure women who are not suited for parenthood at the time they conceive to have an unintended birth. There are multiple factors that can influence a whether a woman chooses to continue a pregnancy, such as her age, financial situation, or substance dependency.

Several negative outcomes resulting from having an unwanted pregnancy have been documented. According to the Institute of Medicine’s Committee on Unintended Pregnancy, women with unintended pregnancies are more likely than others to seek prenatal care later in their pregnancy or receive no prenatal care at all. They are also more likely to use tobacco and alcohol during pregnancy, continue to smoke after giving birth, suffer from postpartum depression, deliver prematurely, and not breastfeed. Their children are more likely than others to have a low birth weight and an increased risk for negative physical and mental health problems.

Crisis pregnancy centers also disproportionately affect women who are young, uneducated, and impoverished, the same groups that have the highest unintended pregnancy rates in the United States. Research published in the New England Journal of Medicine has shown that the rate of unintended pregnancies is higher among U.S. women aged 18 to 24 than among those of any other age group and is three times higher among women who have not completed high school than it is among college graduates. These vulnerable populations are most likely to be drawn to crisis pregnancy centers for their advertisement of free health services, such as ultrasound, STD, and pregnancy testing.

For example, the website for Valley Crisis Pregnancy Center located in Pleasanton, California, encourages women to delay their abortions by emphasizing that miscarriage is an alternative to getting an abortion. On their website, it reads, “Since up to 24% of all pregnancies end in a natural miscarriage, it is important to ensure you are not considering a procedure that may not be necessary.” Crisis pregnancy centers will often use deceptive tactics such as this to convince women to postpone their decision until they are far along enough in their pregnancy that they are no longer legally eligible to obtain an abortion.

By removing the requirement for crisis pregnancy centers to inform women about the reproductive services that are available to them, the recent Supreme Court ruling jeopardizes women’s ability to access the healthcare that they need. Dr. Kristin Luker, the co-founder and faculty director emerita of the Center of Reproductive Rights and Justice at Berkeley Law, believes the Supreme Court ruling, as well as future legislation concerning reproductive rights, has the potential to have a large impact, especially on marginalized populations.

“I really think that there is something, both genius and wicked, about what I perceive to be the strategy. They are not going to outlaw abortion directly, because of the massive political fallout,” she said. Instead, Luker believes that this ruling is yet another step in a political agenda that aims to increase the barriers to reproductive healthcare access. “What we’re going to see is a strategy which is going to continue to make it harder for women to get abortions. We’re going to see a strategy that is going to fall the hardest on young people, poor people, and people of color. These are the people least likely to mobilize.”

The current debate surrounding the intersection of reproductive rights and free speech has many worried about future legislation surrounding these issues. It should be made clear that crisis pregnancy centers have, and will continue to have, the right to provide counseling with a pro-life agenda. However, these centers routinely target women at vulnerable times of their lives by shaming them, providing false medical information, delaying and inhibiting women’s’ access to contraceptives and reproductive health services, and potentially putting the mother and her child at risk of the consequences associated with having an unintended birth. Ultimately, crisis pregnancy centers pose a threat to the health of pregnant women and their children and should be approached not as a First Amendment battle, but as a public health crisis.