Ensuring Reproductive Justice for All

Even though reproductive healthcare has come under constant scrutiny, college students are fighting for their voices to be heard.

Our current political atmosphere is heated, and it is only getting hotter. A major political debate of today is access to healthcare, specifically reproductive healthcare. The Supreme Court case Roe v. Wade in 1973 that federally legalized abortion was superficially an amazing feat in American politics and reproductive justice; however, making abortion legal in the United States exacerbated the pro-life or pro-choice debate, and the controversy continues to blaze in our current political climate.

It is clear that the fight for reproductive justice is under pressure — by passing the “gag rule” that dissuades healthcare providers from informing patients where they can access legal and safe abortion services, the Trump administration limits patients’ access to complete information about their possible options. Despite the Roe v. Wade decision that legalized abortion in our country, political figures with powerful authority and even more powerful opinions enforce the laws as they choose and find loopholes to work around laws that contradict their beliefs.

As the reproductive health debate slowly heats our country’s political atmosphere, however, nowhere is the topic more relevant than on college campuses. Many students argue that abortion services should be available at on-campus health centers. They explain that, whether or not students are participating in safe sex, inconsistent use of or failure to use contraceptives can lead to high unintended pregnancy rates. In fact, according to the Wisconsin Financial Aid Study, 50 percent of college students on average have unexpected pregnancies, and this statistic correlates to increases in drop-out rates and decreases in future income. More than half of University of California and California State University students come from low-income families, and therefore, they experience food and housing insecurity while on campus. Also, students who seek abortion services pay an average of $604. Considering these two facts, a lack of abortion care on college campuses can discourage or inhibit many students from obtaining the care of their choice due to the financial burden associated with abortion. Students who decide to go through with an abortion may face even more financial obstacles when an abortion provider does not accept their student or private insurance, when students choose not to use insurance in order to keep the procedure private, or when students do not have health insurance that covers abortion or do not have health insurance at all.

In addition to cost barriers, physical access can be limited. For example, off-campus abortion services are on average 30 minutes away by bus, one-way, and only 15 percent of providers closest to college campuses are open on weekends. As a result, students must adjust classes, exams, and work schedules in order to attend appointments, which can impair students’ academic performances. Even worse, after finding an off-campus provider, wait time for appointments is usually one week long, and this delay could disqualify a student from getting the abortion since the procedure can only be done up to the tenth week of pregnancy. The fact that people do not usually know that they are pregnant until two weeks after conception shrinks their timeline even more.

Without access to safe and legal abortion, people who want to terminate their pregnancies must resort to unsafe practices that threaten their health and even their lives. People who undergo risky abortions or perform the procedure themselves are at risk of incomplete abortion, hemorrhage or infection, and uterine perforation or damage to the genital tract caused when sharp, precarious objects like coat hangers, knitting needles, or broken glass are inserted into the vagina and pierce the uterus or other internal organs. Given the World Health Organization statistic that between 4.7 to 13.2 percent of maternal deaths can be attributed to unsafe abortion, access to abortion on college campuses can save the lives of students who do not have the resources to seek an abortion off-campus. 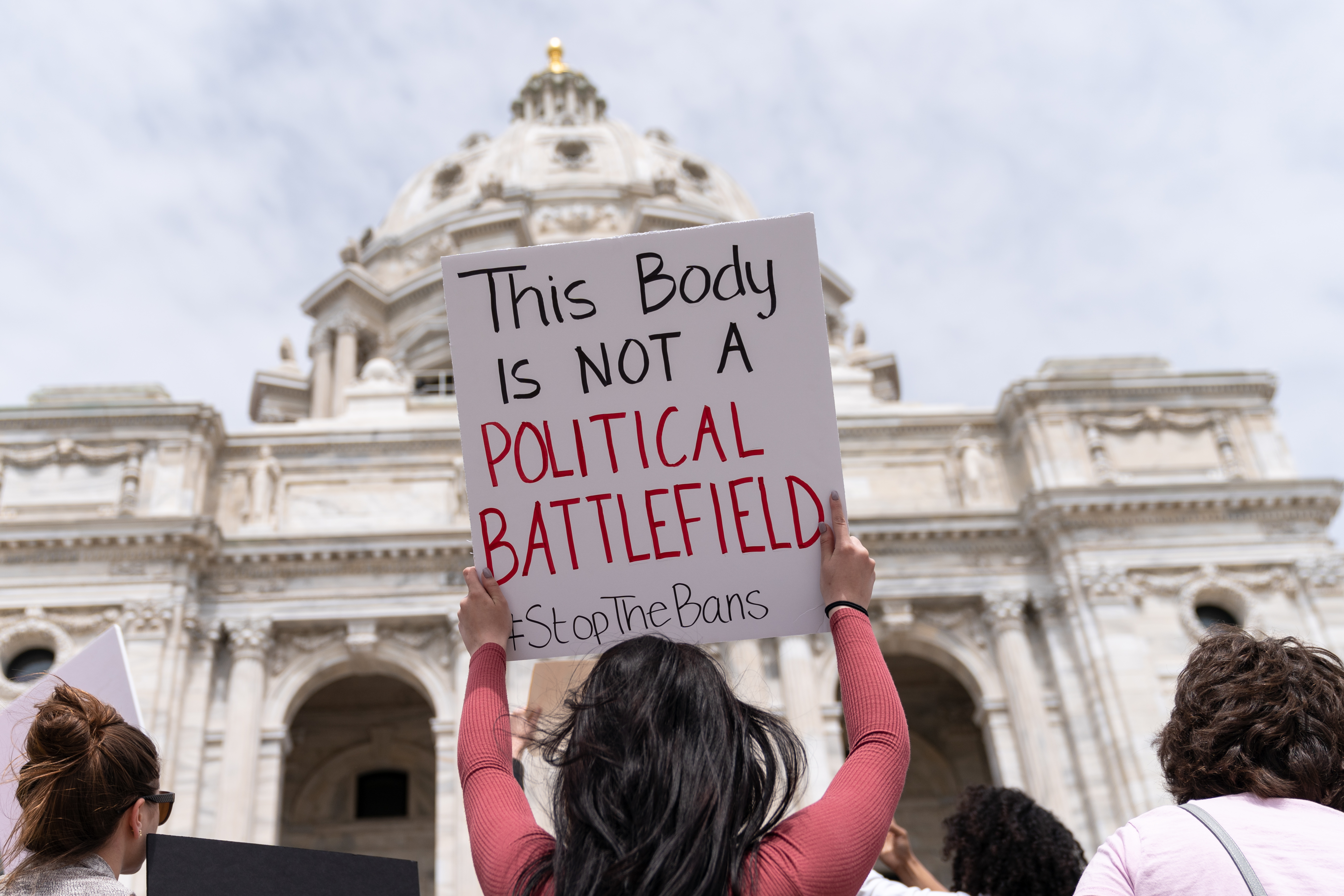 It is clear that the fight for reproductive justice is under pressure — by passing the “gag rule” that dissuades healthcare providers from informing patients where they can access legal and safe abortion services, the Trump administration limits patients’ access to complete information about their possible options. PHOTO BY LORIE SHAULL FROM FLICKR

The College Student Right to Access Act is the California state bill that provides students access to medical abortion on college campuses. Specifically, this bill makes the abortion pill available at university health centers. The abortion pill safely blocks the body’s progesterone hormone needed for a pregnancy to grow and induces an abortion through uterine contractions and the opening of the cervix.

The availability of the abortion pill at university health centers will be a major victory for the overall fight for reproductive rights but an even more moving victory for the people on California college campuses that truly know best what they need. Students at UC Berkeley identified that the hurdles they already have or might have to get abortions are substantial, and they utilized their aggravations to advocate for access to the abortion pill on campus. This small movement launched by a student reproductive health group on campus soon sparked a statewide movement called justCARE California that mobilized students and allies among all California public universities to fight for reproductive justice. justCARE organized a rally at the California State Capitol where students, activists, and lawmakers listened to stories, speakers, and music in support of non-surgical abortion on public universities.

Erika Casey, a UC Berkeley alumna and former general member of a UC Berkeley club called Students United for Reproductive Justice, was one of the many UC Berkeley students that attended the justCARE rally at the Capitol. Casey explains that she joined the fight for medication abortion on college campuses because she believes “reproductive justice is a human and health right.” Growing up in a religious household, Casey was taught as a kid that abortion was wrong; however, her experience in college allowed her to realize that people who want an abortion will seek one out, so abortions must be safe, legal, and accessible.

“Male healthcare is never talked about in the same way [that abortion] is talked about,” Casey said. She makes clear that abortion is a contentious issue, specifically affecting politicians’ electability, and this causes abortion to be scrutinized, policed, and therefore eventually made illegal by politicians like Trump whose beliefs outweigh the reality of people’s healthcare needs. However, following the fervent efforts of student activists like Casey, the College Student Right to Access Act was signed into law by Governor Gavin Newsom on October 11, 2019, which elevates California as the leader for reproductive justice. Newsom’s signature on the College Student Right to Access Act will allow students at California public universities to terminate pregnancies with the abortion pill at their on-campus health services by 2023.

Abortion service accessibility will immeasurably change the lives of students, but despite California’s accomplishment, the average American living in other states across the country can feel their reproductive rights escaping their grip. Trump’s “gag rule” makes family planning clinics like Planned Parenthood ineligible for funding from Title X if they provide patients with abortion referrals. This means that family planning clinics will not receive federal funding if they refer patients to abortion services, which inevitably will eliminate safe and legal abortion options altogether as these services will not receive enough clients. These ongoing threats to reproductive rights require an ardent fight for justice, and the student activists’ success with the College Student Right to Access Act sets the stage for the fierce fight that is only just beginning to provide people with their human rights.

Seen through the progress of this law, we catch a glimpse of the power mobilized, young students can have on the legislative process. UC Berkeley is known as the hub of large scale protests and movements, and we have seen through the history of our campus the impact passionate and driven students can have on creating change for political and social justice. Although Trump’s “gag rule” blocks access to safe and legal abortion care and makes many Americans worry about the fate of the Roe v. Wade decision, the College Student Right to Access Act shows us that we can use our fears as an impetus to take action. As young students, we have great potential to not only create the change our community needs but also rewire the reproductive justice that is unwinding in our country.