This issue was originally printed in our Fall 2019 issue.

As modern treatment methods are developed, blood shortages are an increasingly bigger barrier in healthcare. Where are the donors?

For both the layperson and the student aspiring to join the healthcare field, the notion of saving lives often invokes images of dramatic surgeries or cutting-edge cancer therapies. However, unseen to the public are the larger health burdens caused not by technological or scientific inadequacies but by a simple lack of resources. The current blood shortage has resulted in severe obstacles to immediate, effective medical care, making those dramatic surgeries and cutting-edge cancer therapies ever more difficult to perform.

In January of this year, a polar vortex unleashed Arctic winds into the Midwest and Northeast, breaking several all-time records. Schools were forced to close, and communities rushed to take care of the homeless on the streets. Due to the extreme cold, snow, and coincidental overlap with an influenza outbreak, approximately 450 blood drives were canceled in 30 states, resulting in a loss of over 14,000 donations.

Transplants, chemotherapy, and heart surgeries all require enormous amounts of blood products. A liver transplant, for example, can require up to 120 units of donated blood. The Red Cross typically needs about 80,000 units of blood per day, but recently, it has only had about 36,000 units on hand. As a result, various hospitals in Los Angeles, Philadelphia, and Atlanta have been forced to cancel such elective surgeries in favor of more emergent cases such as trauma injuries or difficult child deliveries.

Less than 38 percent of the population is eligible to donate blood, and of the 38 percent who are eligible, less than 10 percent actually donate blood. Over 60 percent of blood that is donated comes from adults over 40 years old. For baby boomers and their children who lived during World War II, blood donation was a cultural norm and civic duty; a needle puncture and an hour or two out of their day was well worth the cost to support troops abroad. Corinne Standefer, for example, has been a loyal donor for 37 years and has donated over 19 gallons of blood. Every 8 weeks, she rolls up her sleeves and joins the group of seniors that comprise the majority of the nation’s blood supply.

“I was born very prematurely,” recalls Michelle Schanible, the team supervisor for the Red Cross blood drive at Berkeley. “I needed lots of blood products to survive. Later, my grandfather got cancer and needed blood products for his chemotherapy. Now, my entire family makes an effort to donate blood more frequently. Working here is me going full circle and paying it back.”

But as this population ages, the current blood shortage is exacerbated by an increased demand for surgical procedures associated with heart disease. More importantly, however, more and more loyal donors are being phased out and too few young donors are replacing them. Recently, blood services have seen fewer people in their 20s and 30s. Young people may simply lack the same sense of civic duty held by the older generation, but they are also likely more involved in their careers, more mobile, or simply unaware of the need for blood donations to actually contribute.

“I think the problem is partly generational,” said Schaible. “Children usually only donate blood when they’ve seen their parents donate blood because then they’re more comfortable with the concept. My parents, for instance, donated blood during World War II, so blood donation isn’t anything new to me. But I think we’re constantly losing donors because not all children donate blood like their parents do, and the rate of new donors isn’t enough to make up for it. And something weird I’ve noticed consistently is that more women donate than men. I think their maternal instinct makes them caring and natural providers. I’ve also noticed that they tend to be comfortable with the medical procedures.” 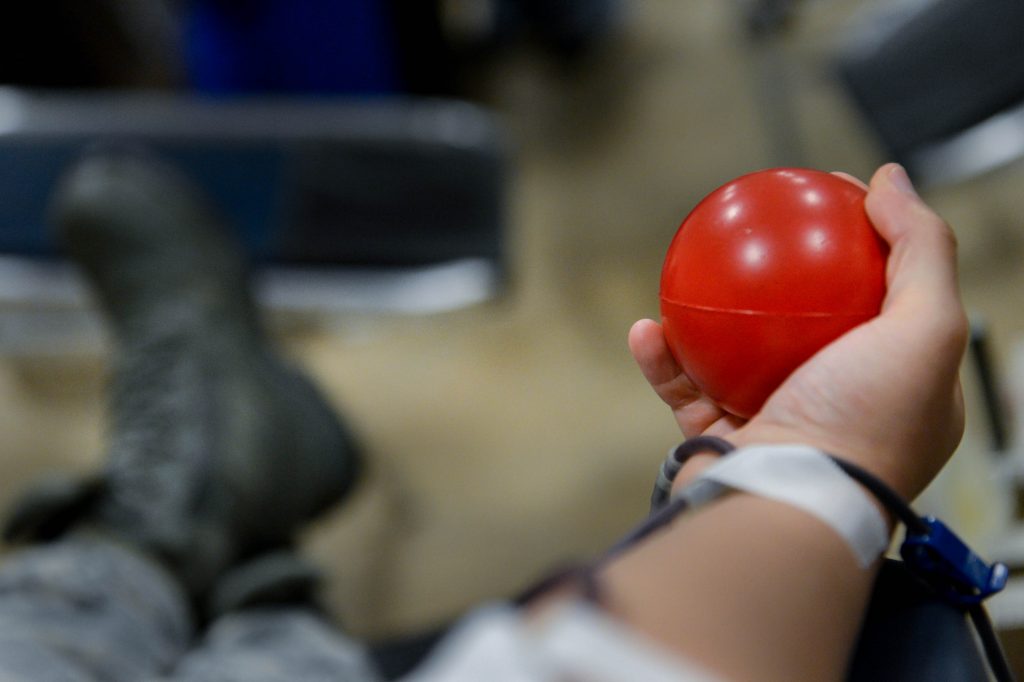 In order to donate blood, an individual must weigh least 110 pounds, be of 16 years of age or have parental consent, and generally be in good health. Although many college students are eligible and have positive views about blood donation, less than 50 percent of them actually donate.

Research throughout the past decade continues to show that an overwhelming number of college students have positive views when asked about blood donation, but only half actually donate. Young healthy college students — particularly male college students — represent an untapped source of willing blood donations and could significantly reduce the blood shortage burden. While it may be disconcerting to think of students as a physical, medical resource, they are perhaps the most accessible group who could feasibly donate blood and replace the older generation.

Whether or not there is a world war being waged beyond our borders, blood donation to support our fellow citizens remains our civic responsibility. Be it the volunteer crossing guard next to the neighborhood elementary school or the neurosurgeon that saves the lives of car crash victims, each citizen plays a productive role in the functioning of our society. If we are ever ill or injured, we expect without question that the necessary blood products will be provided. However, blood donation is inherently communal. We take it for granted that we can all rely on blood donations, but this reliance is only possible if everyone gives back.