Bloodborne illnesses are spreading just as quickly as the stigma around them. Needle exchange programs are trying to tackle both.

It is no secret that bloodborne illnesses are an issue across the United States. It is also apparent how tightly these illnesses, most commonly HIV and hepatitis C, are linked with drug use. More than 25 percent of AIDS cases in the United States among those 13 and older are directly tied to injection drug use. In the last two decades, needle exchange programs have slowly become more prevalent across the United States, and they have been shown to significantly impact bloodborne pathogens. Unfortunately, the lack of federal organization and the stigma surrounding these programs do not bode well for effectively addressing bloodborne illnesses.

Current needle exchange programs have shown to have an immense impact on rates of HIV transmission. In New York, legalization of needle-syringe programs between 1990 and 2002 was attributed to a decrease in HIV prevalence from 50 percent to 17 percent. A CDC study also found that if the U.S. invested $10 million annually into needle exchange programs, 194 HIV infections would be prevented each year. Additionally, the government itself would benefit from these programs, receiving a lifetime treatment cost savings of $75.8 million. In other words, the government would receive a $7.58 return on investment for every $1 spent nationally.

The World Health Organization and American Medical Association acknowledge the effectiveness of these programs and assert that additional resources can provide motivation to pursue recovery, potentially reducing rates of illegal drug use. Joey Shemuel, a worker at the Berkeley Free Clinic’s Needle Exchange Emergency Distribution (NEED) program, wants the community to see that these programs have a multitude of benefits. “Harm reduction works!” he said. “[Our programs] support the dignity, safety, and wellbeing of people who use drugs, and sharps containers that we distribute also provide a benefit to the community in decreasing syringe litter.” Many needle exchange programs, including NEED, refer people to treatment programs when they request it, but addiction treatment is not the main goal of their programs. “We’re always trying to create and maintain linkages with clinics in the community that provide evidence-based treatment for substance use disorders. … We also can refer patients for primary care, HIV/HCV testing and treatment, mental health care, and other clinical services,” Shemuel said. 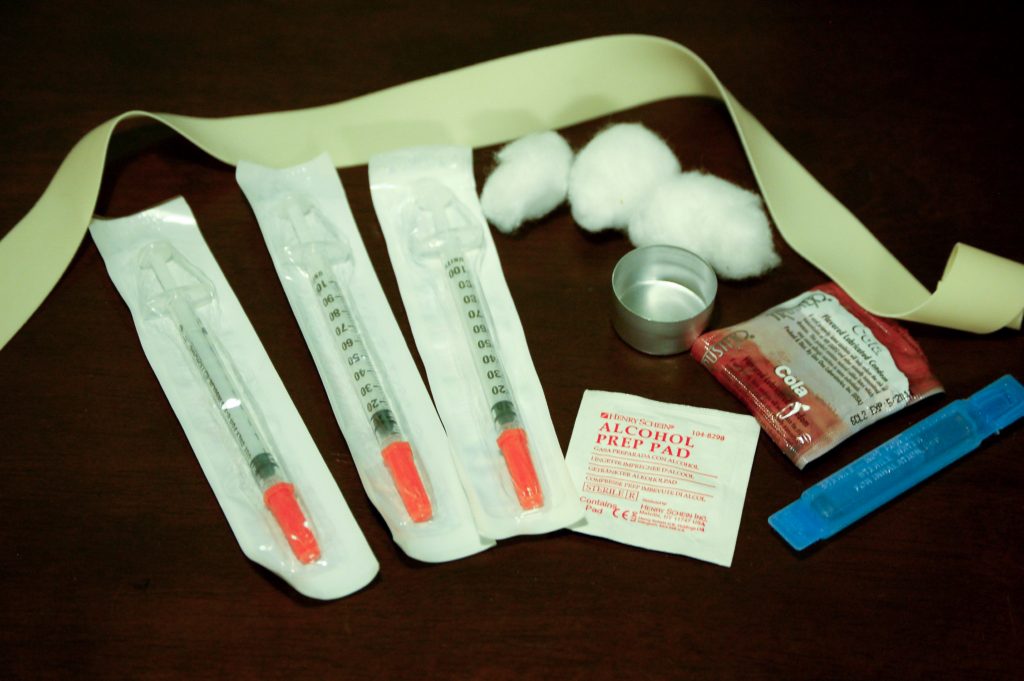 Although the implementation of needle-exchange programs has been shown to reduce rates of bloodborne illness, pushback from communities prevent these programs from actually being enacted. In Eureka, California, a harm-reduction program was implemented, but city council members have since expressed concern about divisiveness in the community surrounding the program. Constituents, too, are wary of needle exchange programs because they may believe the government is simply enabling addicts rather than helping them. Similarly, opponents believe that needle-exchange programs contradict efforts against the war on drugs, instead leading to a rise in drug abuse. Additionally, in order for these programs to exist, there must be accessible spaces in which these programs can happen. Community members often oppose the use of public areas for these programs, citing dangers for residents and children specifically.

In Berkeley, however, there is less opposition than in Eureka. According to Shemuel, “Most people, including many who don’t use our services are happy to see us out in the community. The situation is much better here in Berkeley than in, say, Orange County, where the community managed to get the local harm reduction organization, OCNEP, shut down.”

In his 2019 State of the Union address, President Trump announced an initiative aimed at eliminating HIV within 10 years. However, health departments in states like Maryland, which ranks fifth out of all U.S. states and territories in HIV diagnoses rates, have received no details about how this initiative would be implemented locally. From the outside, it seems that the Trump administration is making strides to support the LGBT community and community healthcare. However, their failure to produce a proper plan for the aforementioned HIV initiative, coupled with efforts to reduce Medicaid and pass anti-LGBT legislation, paints a different picture. If anything, Trump’s statement is nothing but a bandage to patch up a crisis requiring much more effort to resolve. Most needle exchange programs are funded on the county level, and it does not seem that this will change given the lack of federal action. For example, Berkeley’s NEED program hasn’t been touched by federal funding, but it does receive grant funding from the City of Berkeley and Alameda County.

Although needle exchange programs have proven benefits, it may be harder than anticipated to convince the community to support their implementation. In order to tackle this issue at its core, the federal government needs to invest more time and resources into the implementation of effective programs in the regions that need them the most. Most importantly, Shemuel states, “we want people who use drugs to know that we see you, we care about you, and we are here for you.”