This article was originally published in our Spring 2021 print issue.

William T. Valentine had never seen such a strange sight during his 21 years living in Alameda. And as former chief of the Fire Department, he was pretty used to dealing with peculiar situations.

But nothing could have prepared him for the millions of butterflies that swarmed Alameda on the evening of September 25th, 1889. And as the insects swept through the streets for two hours, coloring the air dark brown with speckled gold motes, normal life seemed to pause. Birds pounced on the creatures as they flew by. Dogs and cows looked “apparently in wonder,” mimicking their human owners, as the butterflies danced around noses and tails and hands and paws. And horses neighed and stamped their feet as they were battered by soft touches of thousands of flapping wings.

As the residents of Alameda were witnessing this historical miracle, other residents in the southern part of the state were witnessing a historical tragedy, one Valentine was probably better-equipped to handle: the Santiago Canyon Fire. This fire was not your average blaze. While official records on fire size weren’t maintained until the 1930s, historical accounts place the Fire at a size of over 300,000 acres. It was one of those fires that destroyed cities, wrecked towns, and ruined lives.

Fortunately, thanks to a national attitude toward land management that prioritized fire prevention and suppression, fires like the Santiago Canyon Fire are few and far between in California’s history. And for a century, that policy seemed to work fine.

But things started to change with the turn of the millennium. In 2003, a wildfire burned nearly 275,000 acres of land in San Diego. “A fire of this type is not usual,” said one official in response, explaining that “this is an epic fire for San Diego County.” The blaze would be recorded as “the largest fire in the state” since 1932 (and unofficially, since 1889).

One solution, however, may lie in an increasingly popular indigenous technology that starts fires, rather than suppressing them: prescribed burning.

There isn’t one clear sign that points to a burn day for the Yurok Tribe, located in the northernmost sector of California. Sometimes, hunters might sense that a storm is coming, giving them a natural extinguisher for any fires they ignite. Sometimes, it might simply be the right time of year, when the wind isn’t so strong that it will catapult fire far away, and the land has enough moisture to burn slowly, but not so much that it won’t burn at all. And sometimes, a tribal member might notice that brush is growing too close to their home and request a burn on their land the next time conditions are right.

As President of the Cultural Fire Management Council and a member of the Yurok Tribe, Margo Robbins helps determine when the time is right for fire and trains community members to conduct prescribed burns safely. “They’re called prescribed fires because you must follow a prescription that’s written into a burn plan,” explains Robbins. These prescriptions outline certain conditions that allow fire managers to do burns: temperature, wind speed, equipment available, and other factors.

While prescribed burning may have ancient roots, today, it intermingles the present with the past. Most burns, for example, are accompanied by fire engines equipped with hundreds of gallons of water, a contemporary safety provision. Strategy, too, plays an important role. “One of the most important lessons in learning how to burn . . . is to start at the top of the brush,” Robbins says. Doing so limits the spread of fire, she explains, because it creates a barrier of charred material that fire can not bypass. 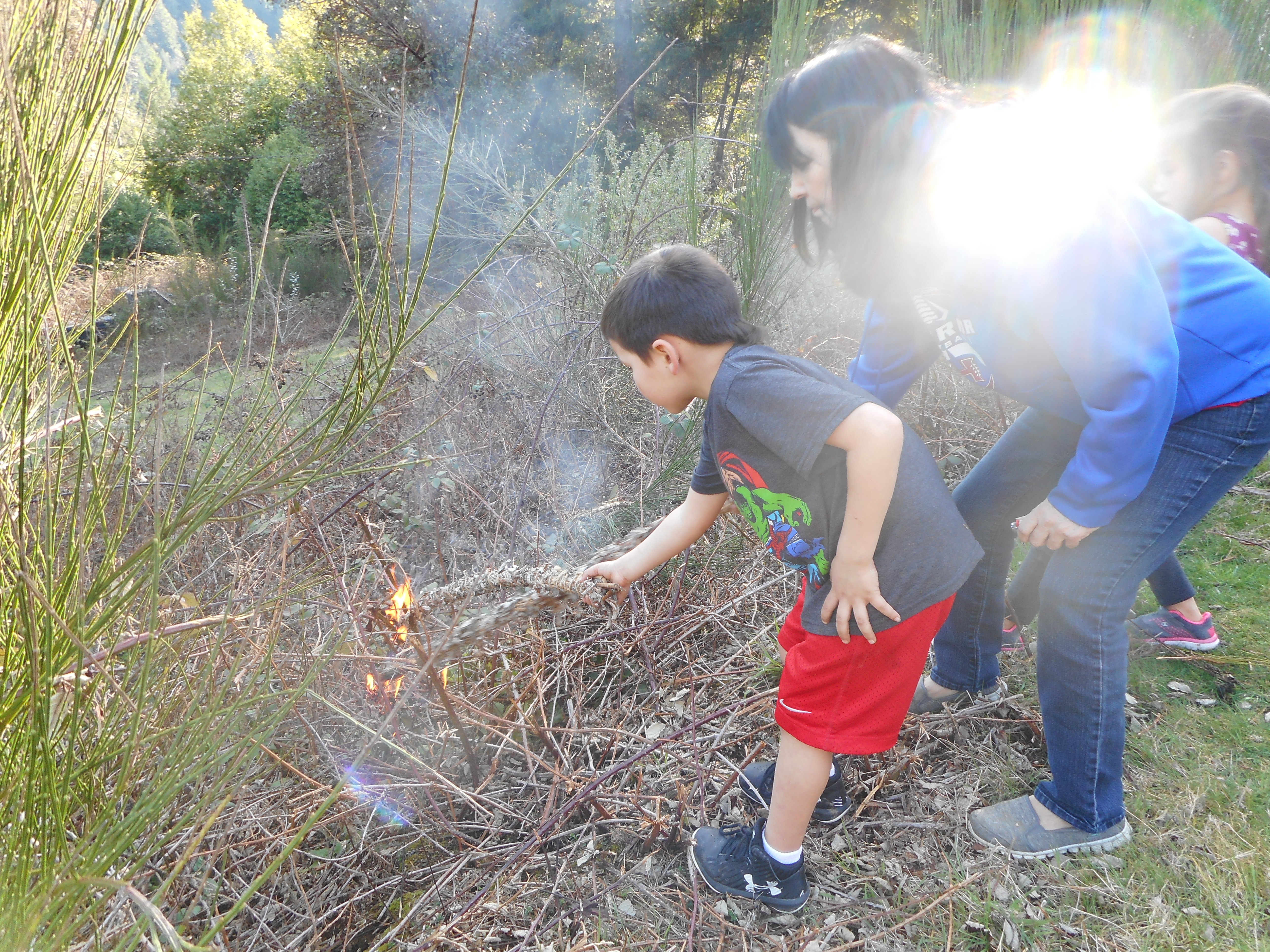 For the Yurok and many other tribes, however, burning doesn’t only prevent wildfires—it also has cultural meaning. “Cultural burns increase the health and availability of culturally-important species, restore the land to a healthy state, and improve the water quality,” explains Robbins. Location and history also endow burns with cultural significance. “Cultural burns have to do with the connection to a place,” continues Robbins. “Here in our country, we have been here since the beginning of time. We are connected to the land physically and spiritually.”

Fire is also important for tribes when it’s not applied to the land. According to Valentin Lopez, chair of the Amah Mutsun Tribal Band, fire is part of their people’s creation story. “The hummingbird brought fire to our people,” Lopez says, explaining that the hummingbird’s throat is red because it got burned while carrying fire to humans. The Amah Mutsun band also uses fire in ceremonies. The smoke from fire, explains Lopez, “carries prayers up to Creator,” as well as “messages, pain, and the need for healing, and the wants that are in our hearts, and our bodies, and our minds, and our spirits.” “We pray,” summarizes Lopez, “with our whole body,” prayer that is aided by the gift of fire.

But cultural and prescribed burning don’t seem to be as widespread in Southern California compared to the North. The Indigenous People’s Burn Network, for instance—one of the largest groups dedicated toward promoting “fire-related cultural restoration”—does not currently operate in Southern California. And while tribes may certainly burn small patches of their own land, there aren’t any broader efforts to encourage prescribed burning in the region.

Gabriel TeSam, Councilman of the Viejas Band of Kumeyaay Indians, puts the scope of their prescribed burning practices in perspective. According to TeSam, the Band, which owns one of sixteen reservations in San Diego County, does burns through their Fire Department about five to ten times per year, primarily with a technique called pile burning. As the name suggests, pile burns involve collecting dry brush and debris into large piles—for the Band, about 12 feet wide and tall max, or the size of a rather cramped dorm room—away from other flammable material and setting the piles on fire. In practice, these burns help clear fuel for only a small fraction of the 1,600 acres the Viejas Band directly manages.

But the Viejas Band has other tricks up their sleeve to manage their land. In the past, explains Bob Pfohl, Fire Chief of the Viejas Reservation, cattle herds roamed the entire reservation, grazing substantive portions of the undergrowth as they wandered. Families manage the land surrounding their homes, sometimes by moving brush away from their borders, other times by doing small burns. And since the Viejas Reservation is surrounded by national forests on all sides, the Fire Department regularly works with the U. S. Forest Service to help with managing the land.

The ecology of the Viejas Reservation might also contribute to the lower demand for prescribed burning. The reservation consists of an open grassland surrounded by chaparral brush, some oak trees, and hills—much different than the Yurok Reservation, which consists of a long river flanked by grassland and forests. According to the California Chaparral Institute, chaparrals need fire no more frequently than every 30 years, and efforts to prescribe burning too frequently can damage the ecosystem. And unlike cities in northern California, San Diego hasn’t experienced a large wildfire since 2003. Without recent memories of wildfires, communities are reluctant to introduce fire to the land again. 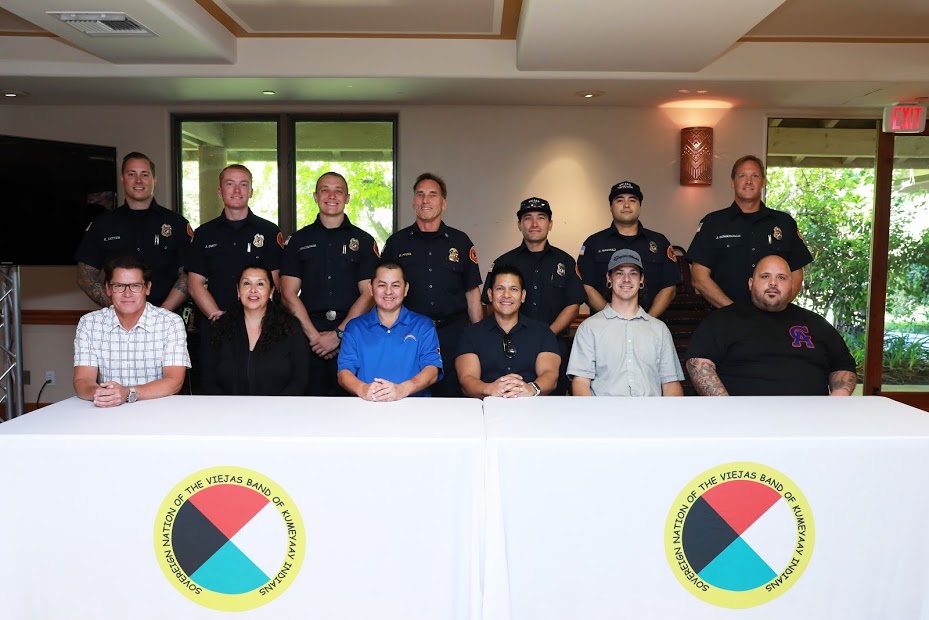 TO BURN OR NOT TO BURN

It’s hard to predict what the future of fire management will look like in California. While prescribed burning is an alluring path, it isn’t exactly a one-size-fits-all solution. Methods of burning vary from tribe to tribe, and even from family to family; different biomes across the state respond differently to fire; and, for many, an internal fear of fire hinders efforts to encourage prescribed burns.

But for Native American tribes, at least, cultural burning seems once again on the rise, even after being suppressed for over 100 years. TeSam and Pfohl seem poised to take a careful, incremental approach to bringing fire back to the land of San Diego, recognizing that the arid climate and built up fuels make tasks particularly daunting. “Both burning and animal grazing are both effective,” says Pfohl, but fuel still needs to be mechanically removed to prevent structure fires and “give firefighters a fighting chance.” With the prospect of restoring the land on the horizon, Lopez feels compelled to bring fire back to Amah Mutsun lands. “Our creation story tells us that we have a responsibility to take care of Mother Earth and all living things,” says Lopez, “and Creator never rescinded that obligation.” And for Robbins, the right to burn on her own land was always her right to begin with. “We never gave up our right to use fire,” she says. “We still hold that sovereign right.”