I Feel It in My Gut

This article was originally published in our Spring 2021 print issue.

In the mid 1880s, Austrian pediatrician Theodor Escherich discovered the gut flora, noting the impact of Escherichia coli on children’s diarrheal health—a discovery that would forever shape our understanding of human disease and the organisms residing in our guts.

Picture thousands of single-celled bacteria, fungi, and viruses exchanging materials in a hot, varyingly acidic set of pipes—this is essentially your gut microbiome.

The average human’s gut consists of an astronomically high number of microbes—1014 resident microorganisms, approximately the size of an entire football field. Remarkably, the average individual only shares 10 percent of their microbiome bacteria with the next individual. Thus, in many ways, gut bacteria is a fingerprint, uniquely curated to individuals from birth and  constantly transformed through the food we eat, our sleeping habits, and other lifestyle factors specific to ourselves. 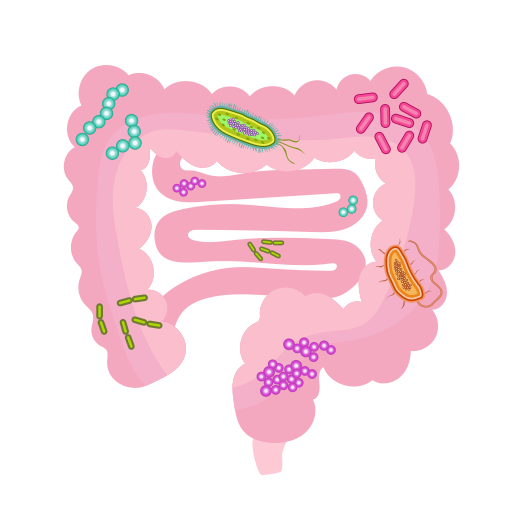 Even bacteria within your microbiome vastly differ from the next. In fact, according to researcher Michael Snyder of Stanford Medical School, “while two humans typically differ by about 1 in 1,000 DNA bases, bacteria of the same species may differ by as many as 250 in 1,000 bases.” As Mary Horton, a PhD student at UC Berkeley currently studying the effects of the microbiome on Multiple Sclerosis explains, “[bacteria] may share the same order, class, or genus but might have opposite effects, so studying the species or substrain level is how we’re going to learn [about the microbiome].”

This diversity of microbes has spurred interest among several in the scientific community to sequence and explore the role of microbes in regulating body functions. The microbiome has been found to aid in food digestion and vitamin production, providing a barrier against pathogens and regulating the immune system. Recent research has revealed a correlation between gut bacteria and mental illness, illuminating the presence of a gut-brain axis, with mice models confirming associations between gut bacteria and depression, anxiety disorders, Multiple Sclerosis, and other neuronal diseases.

The precise mechanisms for how gut bacteria might alter brain function is still an area of several unknowns. Yet, researchers typically agree on three primary mechanisms of gut-brain exchange: neuronal, immune-mediated, and metabolite-mediated pathways. In each pathway, the brain and gut function symbiotically; gut bacteria alter stress and hormone expression in the brain, while the brain influences motility and nutrient transport to the gut bacteria.  In depression, researchers theorize that microbiota of the genus Bacteroides alter brain function through the first mechanism, neuronal activation of stress circuits. Gut microbes produce neurotransmitters that make their way to the vagus nerve, a nerve connecting the brainstem to other organs in the body, and can accordingly shape brain activity. Gut bacteria may also alter the brain through immune-mediated pathways; several scientists have found elevated cytokine levels in people suffering from depression. Gut bacteria may also impact the brain through a third pathway, metabolite-mediated signalling. Through this mechanism, bacterial imbalances or pathogenic bacteria in the gut may reduce the number of metabolites, which can consequently trigger depressive behaviors.

Research on the gut-brain axis is of particular significance amidst the COVID-19 pandemic, during which dramatically “high rates of symptoms of anxiety, depression, post-traumatic stress disorder, psychological distress, and stress” have been reported by people across the world. In light of the pandemic’s severe impacts on mental health, the gut microbiome serves to potentially amplify or alter the adverse impacts of mental health experienced by individuals depending on the makeup on their guts.

The gut-brain axis is of particular interest to medical professionals because, as Horton explains, “your gut microbiome is a potentially modifiable area of your body…that might be easier to access.” Individuals can actively alter their microbiome through lifestyle changes. This presents potentially transformative nutritional interventions that may improve overall health. Take prebiotics, dietary fibers in food that fuel bacteria in the body. Fibers and fermented foods like Kimchi, Miso, and Tempeh, which are fermented by bacteria in the gut, produce crucial metabolites  like short chain fatty acids, which may induce beneficial impacts on the brain. In recent years, several studies have shown that the Meditteranean diet, which is composed of several prebiotic, fiber-rich foods such as fruits and legumes, can play a critical role in the health of the gut microbiome precisely through this mechanism. Furthermore, probiotics, live microorganisms, can promote good gut health. According to The Food Revolution Network, vegetables, grains, and beans cultivate a positive gut environment as opposed to meat and junk food, which generally negatively impact gut health. In quarantine, where people are likely to consume carbohydrate and sugar-heavy foods and not enough micronutrients, turning to plant based foods and Mediterranean diets may provide the crucial nutritional intake needed for overall health, upon digestion by the gut.

As research on the gut bacteria is still ongoing, there is a lack of concrete developments by healthcare researchers on mental health interventions via gut bacteria. In spite of much inaccessible mental health infrastructure including unaffordable fees for medical care, psychologists recommend accessing counselors, medical professionals, and therapy for people struggling with their mental health. During the pandemic, students at Berkeley have access to the Tang Center’s facilities, which include group therapy sessions as well as one-on-one counseling. Furthermore, health professionals recommend regular good nutrition and exercise, which can boost endorphin production and ease symptoms. The Basic Needs Center and student cafeterias provides reliable guides to health nutritional intake that can boost beneficial gut bacteria activity.

Ultimately, the gut-brain axis can not be neglected when it comes to mental health. Health professionals must take a holistic perspective on evaluating their patients’ mental wellness, considering gut health in the process. One cannot exist without the other.