Refinery Pollutants and their Effect on Public Health

Michele’s classmates peered out of the classroom window and gasped in disbelief at what they saw. A thick, black cloud hovered over the small towns of Rodeo and Crockett menacingly, slowly traveling toward them. The smoke wouldn’t stop spilling into the sky, it seemed. The principal’s voice radiated from the speakers, informing John Swett High School that the Rodeo refinery had just exploded. Michele Reyna, a life-long resident of Rodeo, called her mom in a panic. Her mom was supposed to be at home, which stood only a few yards away from the refinery. As the entire school was put in shelter in place, the classroom broke into utter chaos, as students called their parents in a worried frenzy. Later they would find out that two tanks containing 250,000 gallons of ethanol exploded, and the town of Rodeo was placed under a “hazardous material” emergency shelter in place. But just as the cloud of smoke soon dissipated into nothingness, not much more was heard about the causes of this explosion. According to Charles Davidson, an advocate from the Rodeo Citizens Association, a report still hasn’t been made on this incident, which was supposed to be done 1 year following the explosion. 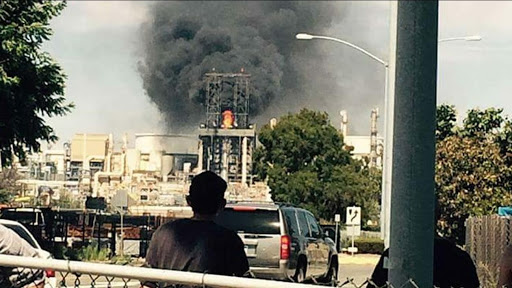 Refineries are no stranger to explosions. According to Randy Sawyer, a Deputy Director at the Contra Costa County Hazardous Materials program, refineries used to explode almost annually in the 1990s, but have significantly reduced since then. They still happen, however. For example, the 2019 Rodeo Refinery explosion is an eerie reminder of the 2012 Richmond Chevron Refinery explosion. Dr. Gina Solomon, a physician and researcher at UCSF, states that following the 2012 explosion, many residents had to go to the emergency room due to acute cough, burning eyes, and sore throat (which are parallel symptoms for wildfire smoke). Sudden events like refinery explosions or leaks can have more rapid effects on community health due to higher concentrations of toxins in the air. Even more concerning, some refineries use different chemicals from other companies. These chemicals can be more dangerous, and even lethal if released through an explosion. Specifically, hydrofluoric acid (which is found in some Southern California refineries) could potentially kill people if released. Some Bay Area refineries use hydrochloric acid, which is quite acidic and could cause severe burning of the eyes, nose and throat. This chemical would also be very dangerous for people with preexisting conditions like asthma, especially if released through an explosion or leak. “I’m surprised refineries don’t explode more often,” Solomon remarked. Solomon also noted that the chronic stress associated with living near a refinery can cause mental health issues. This constant worry itself is a threat to public health, according to Solomon.

The health effects of living near a refinery prove to be chronic and gradual. These invisible fumes creep into the lives of thousands, and victimizes many. According to the California government, some adverse health effects living near a refinery include: increased risk of asthma, cancers, birth defects, neurological damage, cardiovascular damage, difficulty breathing, and blood disorders. Additionally, those who live closer to oil refineries are statistically more at risk to develop these health disorders, even if they are 10 miles away. Minority groups are disproportionately affected by the toxic harm of refineries, and are often pushed into the frontlines due to poor city planning and wealth gaps. Latinos are 51 percent more likely to live in counties with unhealthy levels of ozone. and nearly two million are living less than half a mile from oil and gas facilities, a National Hispanic Medical Association (NHMA) report found. High poverty rates prevent these families from moving away from these polluted areas. To make matters worse, minority communities frequently have limited access to health care and treatment. According to a NAACP report, in many African American communities the air violates ozone level standards. Annually, members of the African American community experience over 101,000 lost schooldays and 138,000 asthma attacks due to air pollution from refineries.

How exactly do refineries ensure the safety and health of local communities? When Dr. Solomon (who was appointed by Governor Brown to work in the task force to create refinery safety rules) was asked about refinery safety procedures, she stated that there isn’t a universal policy that blankets all refineries. Rather, there is a convoluted network of regulations, which resembles a hierarchy and varies across refineries. Some refinery companies are more advanced than others. The task force’s approach boiled down to a hybrid of engineering solutions and cultural changes. According to Solomon, engineering solutions included looking at the “hierarchy of hazard controls”. Completely eliminating a dangerous chemical lies at the top of the hierarchy, lowering pressure and temperature lies below it, then containment, then inspection lies at the bottom. Many refinery companies relied on the bare minimum, which was inspection and repair, according to Solomon. The task force
put together a network of incentives to pressure refineries to do beyond the bare minimum. According to Solomon, refinery companies can get into serious trouble if they defer maintenance. Besides engineering solutions, Solomon described the importance of safety culture. There’s an endless dilemma weighed by refinery companies, where making money while maintaining safety are juggled. In many refinery companies, the safety culture only included placing a clamp on a suspicious pipe. These short term “solutions” prioritize production rather than safety, often because it is more expensive to completely stop production and fully address the issue. Part of Solomon’s job was to create a culture where workers were allowed to stop work if they identified a safety hazard. Under new requirements from this task force, refinery workers are protected and refinery companies cannot retaliate against these workers.

The following question still might be lingering: can local residents coexist with refineries? There are several alternatives that promise to diminish the toxic effects of refinery pollutants, including transitioning toward biofuels. More specifically, the Rodeo Phillips 66 claims that “The plant would no longer produce fuels from crude oil, but instead would make fuels from used cooking oil, fats, greases and soybean oils [by 2024].” When Solomon was asked for her thoughts on biofuel alternatives, she noted that these may be steps in the right direction, but burning fuel can nevertheless harm community health. Davidson describes being hesitant to accept biofuels as a definitive alternative, namely due to the large amounts of land that would be displaced for costly biofuel production, and the amount of fossil fuels needed to convert organic matter into ‘renewable’ transportation fuel. Instead, Davidson advocates for the “managed, but still expedited and eventually complete removal of fossil fuel consuming refineries, with emphasis given to the complete remediation of effected refinery properties and the long-overdue restoration of the blighted communities enduring on refinery fence lines.” In addition, he advocates for the full protection for potentially displaced refinery workers.

When asked about how else the community can be protected against refinery pollutants, Davidson replied, “We need a community monitoring system. Rodeo doesn’t have an particulate monitoring system, which can give a report on particulate matter in the air per minute. These monitors are really helpful. They’ve helped move playgrounds from one side to another due to the high particulate matter in the original playground. It is critical for Rodeo (and also Crockett) to be monitored extensively.” Similarly, a preschool in Rodeo’s Bayo Vista community only stands a few yards away from the refinery. Davidson noted solemnly, “It really pains me to see how towns like Rodeo are made into sacrificial communities just for better gas. Rodeo is mainly a working class community and is easy to be taken advantage of.” Indeed, fenceline communities are often unaware of the toxicity of living near a refinery. It’s encouraged that local community members go to city meetings, do health surveys of neighbors, talk to local political representatives, advocate for air monitoring systems, and protect themselves by taping windows, wearing masks during high levels of pollution, and invest in air filters.