Healthcare can be dependent on an individual’s/nation’s income. But, a country’s economy can be heavily influenced by better health practices and policies. As Bloom and Canning stated: “Health may be not only a consequence but also a cause of high income.” This can work through several mechanisms. These mechanisms include increasing human capital via methods such as keeping a stable population, taking public health/preventive methods to ensure safety for all, and ensuring that there is an equitable distribution of national funds.

When we first view healthcare, we examine how the economy has benefited us. Studies show that an increase in income is correlated with better health. If income was even 1 percent higher in developing countries, the infant mortality rates in these regions will decrease immensely. Raising per capita incomes will be an important component of any country’s health strategy. However, there are limitations to this. When new treatments come out to the public, the people who can access it first will be the people who are better off. This causes a divide between classes of people, which increases healthcare inequality, which is when one group of people in an economy is in much worse health than another group. In the United States, health inequality is heavily correlated with income inequality. As healthcare becomes more privatized, it becomes harder for poor populations to get the help they need.

Increased income also contributes to increased spending on public and private goods that directly or indirectly improve health. But, this can only occur if this increased income also comes with policies stating that there will be an equitable distribution of income. According to the Preston Curve, over time there will be an increasing and concave relationship, shifting upward. The Preston Curve only models 10-25% of the improvements countries have made in terms of their life expectancy and national income per capita. 70-90% of the improvements for life expectancy come from other factors such as public health interventions and diffusion of health sector innovations.

According to Amartya Sen’s Capabilities Approach, “given other factors, higher income is a contributory factor to better health,” but it’s not the only factor. Also, other factors may not be generalized across various countries due to differences in governance and policy. Sen believes deeply in the idea that healthier workers are more productive, which is what makes a nation wealthier. He believed in two processes in which economic growth may affect human health. The first method is the growth-mediated process. This describes a fast economic growth, where success depends on “economically broad” systems (strong employment emphasis is a major factor) and the use of funds for social services, such as health care, education, and social security. The second process is the support led process in which it “does not operate through fast economic growth, but works through a program of skillful social support of health care, education, and other relevant social arrangements.” The support led process gave a more holistic approach to healthcare, which would be a way to catalyze human capital. This process gives us insight into how health can cause an increase in income, benefiting the economy.

Health and economic development are very interconnected as we can see already from the examples above. Recently, studies have shown that better health helps with economic growth (healthy workers help build a wealthy nation). Three factors contribute to the concept of health being the facilitator for economic growth. The first factor is having a low age dependency ratio, which means that the population age structure needs regulation so that it can be maintained to sustain people’s lifestyles. Declining mortality and fertility rates help lower the dependency ratio. The dependent population consists of children (0-14 years old) to senior citizens (65+ years old). These are vulnerable groups of people because the children need strong support during their developing years since they are being trained to eventually go into the workforce to then in return take care of the older generation that also helped them get to a stable place in life. The age ratio is calculated by dividing the dependent population by the working population (15-64 years old). As more children and the elderly become more dependent, there will be a noticeable shortage of labor, which is harmful for the economy. The country would not be able to make enough income to support all its citizens. According to the World Bank, as the dependency ratio went down between 1965-2009, the GDP per capita increased in Asian Countries. This is known as the Asian Miracle (the data for this is shown in the World Bank’s table on demographic variables affecting economic growth from 1965 – 2005) (see Table 1). 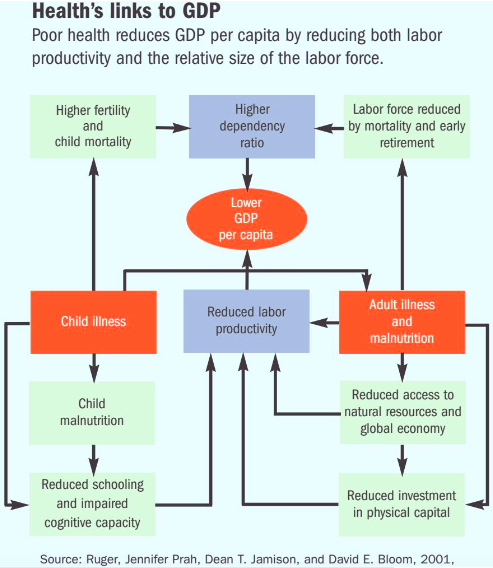 The link between health and GDP is depicted in the chart by Ruger and co (see Figure 1). Poor health reduces GDP per capita by reducing both labor productivity and the relative size of the labor force. A higher dependency ratio is shown to lower GDP per capita. When there is a higher dependency, sometimes populations are not able to sustain themselves due to high fertility/mortality, and a reduction in the labor force. These would be consequences of child/adult illness and malnutrition, which directly affects productivity among the workforce.

The other two factors are high physical capital accumulation (savings) and higher investments towards Human capital development (to create healthier, more educated and productive labor). Better health increases productivity within laborers. These factors had a huge role to play within the Asian Miracle. High levels of savings contributed to high rates of physical capital. This helps build a more sustainable environment because there is an increase in the need for saving towards retirement funds. The working population usually has the main peak in savings when they are preparing for retirement. A longer perspective lifespan can increase the incentive to save for retirement and business investment. As long as families can sustain their earnings and spending, they are usually in a comfortable position. The only issue some countries face is the high cost of healthcare, which can cause families to go into debt/poverty. But in an ideal situation, the savings can alleviate some of the stress when it comes to healthcare costs.

When people start saving more, this causes a savings boom, which in turn causes a baby boom. Baby booms help provide the future with labor supply, but it also ensures that there will be a higher investment in education and health since they are dependent on the working (saving) population. Childhood is fundamental for development, which sets the stage for the rest of people’s lives. If they have a strong foundation with proper education it can have a direct correlation to their cognitive skills, learning abilities, and willingness to continue education to go into the workforce. A lower mortality rate will also be observed with this factor since the older population can rely on the working population too. But low mortality rates correlate with low birth/fertility rates, which is also good to keep the population stable. Low mortality and fertility rate also correlated to a more working population and even more female labor force participation.

With a better population structure, Asia was able to build its human capital, which has also helped with their economic growth, making Asian countries some of the largest and most dominant powerhouses in the world. When there is more productivity and a goal for holistic healthcare for workers, it encourages people to contribute to the workforce, which is beneficial for the economy.

The most recent pandemic that has affected a lot of lives this year is the coronavirus. This has forced nations to look at epidemiologic methods to help solve the issue. “epidemiology is concerned with the distribution of disease and death, and with their determinants and consequences in population groups.” According to the epidemiologic transition model, disease control is not only a prerequisite of fertility transition but an effective instrument of socio-economic development as well. There are three main disease determinants that we need to focus on to tackle the coronavirus. First are the eco-biological determinants, which requires the balancing of the disease with the environment and the hosts. Then we have socioeconomic, political, and cultural determinants, which ties in with economics because this relates to healthy living conditions, hygiene, and access to quality nutrition. Finally, we have medical and public health determinants. With a better economy, the country can focus on public health awareness and health education that can warn people about large-scale pandemics. Also, with proper distribution of funds, a country can develop into having better sanitation, immunizations, and access to therapy (because health is more than just medical/physical healthcare).

As countries become more modernized (westernized), technological advancements play a larger role in the healthcare field. The developing world is being significantly influenced by imported medical technology. But, historical evidence shows that economic growth was not the only source of epidemiological change. In most cases, the past shows that economic growth, with increased industrialization, has always affected health negatively. For example, the industrial revolution (1830-1840) created epidemiological disasters in new industrial cities within England. Social and political movements were the cause of spreading healthcare awareness and benefits with a nation’s accumulation of wealth. This includes public health measures such as ensuring that there is a clean water system, better housing with increased community health efforts, and regulation of urban lifestyles with food and environmental issues.

With this public health approach, citizens can be more informed about their surroundings and health issues that may arise. The coronavirus is one of the largest pandemics we have seen in years. If there had been accessible health services, and more awareness about health and hygiene, this could have been prevented. The reason the virus is spreading so fast and across the globe is due to a lack of awareness of how to contain this in certain regions. However, some countries are shutting off the entry, or are making sure to do intensive checks on people to make sure the virus does not spread more.

In Singapore, the government is highly involved in protecting the health of its people. As soon as they received news about outbreaks, they closed the country to the virus through the land, air, and sea. They make sure to do extensive checks on cars entering the island, airports are filled with officials making sure that the health of people entering Singapore is safe, and the coastal lines are highly secured as well. Anyone with a fever does not get through. Within the country, they are putting more effort into sanitation by cleaning bus poles, playgrounds, schools, food courts, elevator buttons, and anything accessible to the public. Also, the Singapore army packed around a million masks for the whole country for every single household and distributed them to everyone for their safety. This is a great example of how a government should be spending its money on better preventative public health measures. These measures were taken place due to the government prioritizing the pandemic through the distribution of the nation’s wealth into awareness and action against coronavirus.

Human capital, as a driver of upwards-socioeconomic mobility, is the key to improving our healthcare system. It is the glue for a holistic approach that bridges the gap between the physical financial barriers and productive healthcare policy.